In Gov. Gavin Newsom’s $300.6 billion spending proposal for the upcoming year — sent to the state Legislature on May 13 — $93.2 million is allocated for issues on the Jewish Public Affairs Committee of California’s legislative agenda.

JPAC executive director David Bocarsly said the advocacy network, which lobbies in Sacramento to make sure the voice of the state’s Jewish community is heard, has never seen so many of their priority items funded this early in the budget process.

Items in the governor’s draft, known as the May Revise, are expected to remain in the final budget, Bocarsly said, once the Legislature finalizes its own proposal and reconciles it with the governor’s budget by June 15.

Of the $93.2 million allocated, $50 million will go to the state’s Nonprofit Security Grant Program, an initiative for which JPAC and the caucus lobby heavily every year. The NSGP provides $200,000 grants for security measures to California nonprofits — including synagogues, mosques and Planned Parenthood centers — that are considered at high risk for hate crimes.

In 2021-22, Bay Area Jewish organizations received more than $4 million through the NSGP.

JPAC asked for $80 million for the program for 2022-23, as last year’s allocation of $50 million — a previous all-time high — funded several organizations but left many without resources, Bocarsly said. Nonprofits aren’t allowed to apply for the grant two years in a row.

“I still think it won’t meet the demand, but it will do a significant amount of work to get close to it,” he said.

This budget draft also calls for $40 million to rebuild summer camps damaged by recent wildfires. The six camps ticketed to receive funding include URJ’s Camp Newman in Santa Rosa and two other Jewish camping entities: the Wilshire Boulevard Temple Camps and the Shalom Institute, both in Los Angeles County.

Camp Newman was nearly destroyed in the Tubbs Fire, losing 81 of its 90 structures. The camp has raised more than $65 million for its rebuilding efforts, camp leadership said, from personal donations and grants from the state. Camp Newman has been allotted $11.83 million in the proposed budget.

Camp Newman executive director Ari Vared said that this allocation will be the largest lump sum the camp has received so far.

“I live and I think the whole community lives with just immense gratitude for the recognition of the important roles that we play, not just as a Jewish summer camp, but also as a year-round retreat and conference center for the whole community,” Vared said.

Also included in the proposed budget is $1.4 million for the Governor’s Council on Holocaust and Genocide Education and $1.8 million for the Commission on the State of Hate, two other programs supported by JPAC.

The proposed funding comes after JPAC Advocacy Day on May 9-10, when hundreds of politically minded Jews gathered in Sacramento to lobby legislators and the governor’s office for JPAC’s legislative items. These included the Holocaust Survivor Assistance Program, which provides resources for Jewish family service agencies, and the proposed California Extended Case Management Program, which, if created, would aid refugees, asylum seekers and trafficking victims.

Lillian Ilsley-Greene is a J. Staff Writer. Originally from Vermont, she has a BA in political science and an MA in journalism from Boston University. Follow her on Twitter at @lilsleygreene. 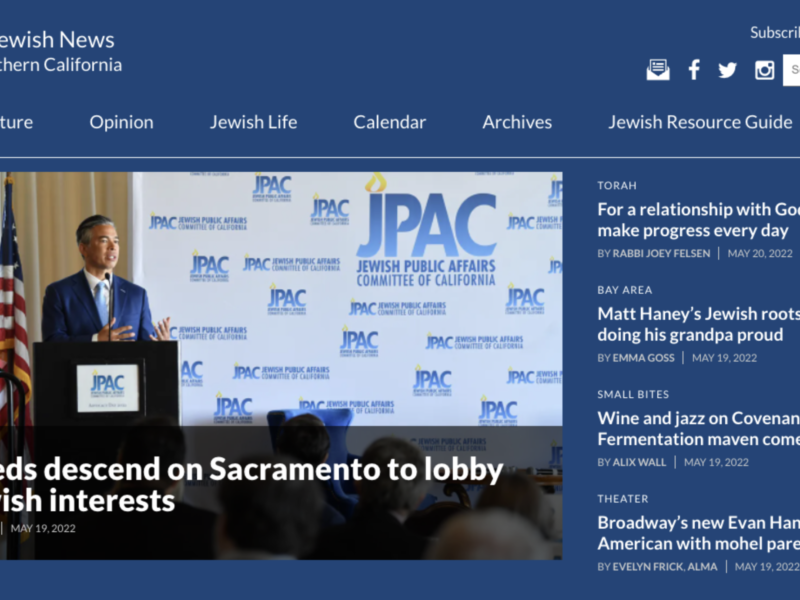 The J.: Hundreds descend on Sacramento to lobby for Jewish interests